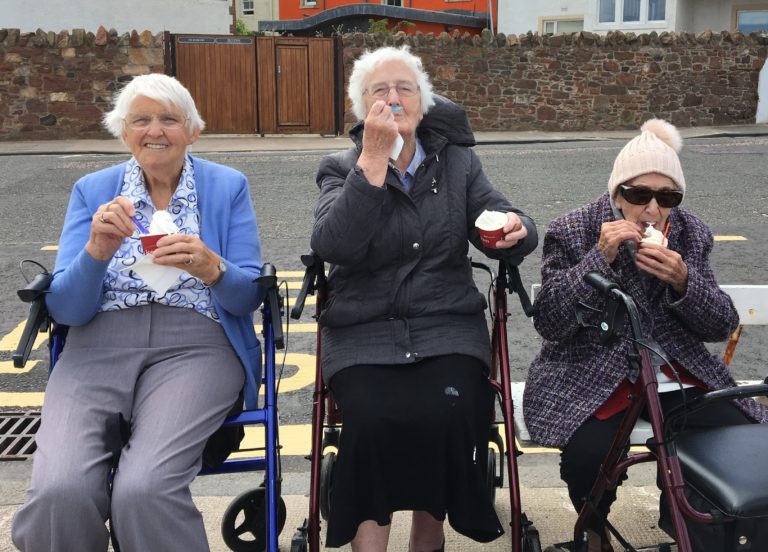 Since its inception eight years ago Berwickshire Housing Association’s BeFriend Project has grown from strength to strength and is now an invaluable service to the lonely and isolated.

Back in 2012 Seton Care was a subsidiary of BHA and, with funding from Comic Relief, they decided to start a befriending scheme for older people, known as Seton Care Befrienders. At the time, there was increasing evidence of the negative health impacts of loneliness and they wanted befriending to compliment the home care they were providing. The project’s aim was to provide one to one befriending for older people using trained and experienced volunteers.

BHA’s BeFriend Project Co-ordinator Terri Bearhope, who has been there from day one, remembers that in its inaugural year 40 people were making use of the project.

Then, In 2014, the project applied for the Approved Provider Standard run by the Mentoring and Befriending Foundation and was successful. The Standard is a quality mark that lets people know that a project is well run and able to support its people

Terri added: “We took on a sessional worker to run the new groups that Comic Relief had agreed were a good idea to help with the increasing waiting list for volunteers. The groups were a great success and continue to this day.”

By 2015, Seton Care Befrienders had 100 people on its books, 30 of them being volunteers. The number of volunteers has remained steady ever since, with people coming and going but the overall number only varying a little.

The Comic Relief funding had run out by 2016 but they were lucky enough to be awarded five years of National Lottery Community Funding. In a year of huge changes, the name of the project changed to BeFriend, it moved from Seton Care to be run directly by BHA, and another staff member, Kerry Hague, joined Terri.

Terri explained: “Kerry’s main role became looking after our group befriending service, which has become a lifeline for many of our people. Day trips, Christmas lunches, small concerts, and craft sessions, have all been hugely popular. In 2018 Kerry took the lead in applying for the Volunteer Friendly Award, helped by Volunteer Centre Borders. We were delighted to be given the award as recognition of our work with our volunteers.

“2019 was another great year for us because we gained two new colleagues, Sarah Barnard and Kerry Whitson. Sarah’s job mainly involves using her amazing administration skills to keep the rest of us organised while Kerry helps with the groups and has taken on our new short-term intervention service. They’ve both become very popular with everyone in the project.”

This year Covid-19 and lockdown came as a huge shock to the system for everyone. BeFriend immediately switched to telephone only befriending and started to take on many more isolated people, mainly, but not exclusively, BHA tenants.

Terri said: “The vast majority just want someone to chat to for ten minutes a week, but we’ve been able to help some people with shopping and other essential tasks. Staff who were able, have also been visiting people in their gardens, socially distanced, when they felt that the person particularly needed that support. “

Hopefully, it will be back to service as usual very soon but in the meantime, please get in touch if you live in Berwickshire or Kelso and would like to join BHA BeFriend as either as a volunteer or as someone who needs a bit more company. You can reach them  on 01361 884000 or at befriend@berwickshirehousing.org.uk.