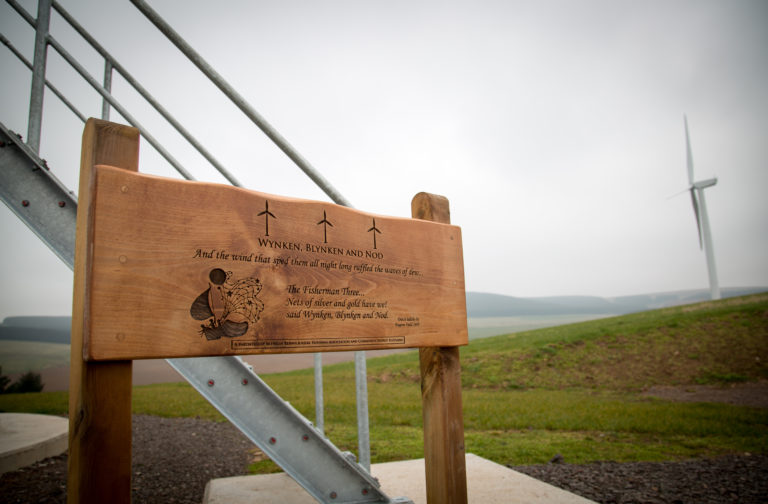 Berwickshire’s innovative and award winning wind farm, The Fishermen Three, has exceeded all expectations in its first year of operation.

The wind farm at Hoprigshiels, near Cockburnspath, has generated 24,052MWh during the past year and the project has also provided an initial community benefit payment of £37,500 which will go to the communities closest to the wind farm site, to be spent on whatever they identify as their priorities.

The three turbine scheme was the first wind farm in the UK to be developed by a housing association as a means of funding new homes for social rental and is a joint venture between Berwickshire Housing Association (BHA) and Community Energy Scotland (CES).

By supplying energy to the National Grid, the wind farm will create revenue for BHA of around £20 million over the next 25 years – enough to allow them to build 500 new homes over that period.

CES’s £10 million share of the revenue will enable it to support communities across the country to develop and benefit from renewable energy projects and play a crucial part in building a greener energy system.

“We’re really pleased to have generated over 24 million units of electricity in the first year of operation for The Fishermen Three – enough to boil a full kettle about 106 million times!

This is almost exactly how we expected the site to perform and it’s really exciting to see the turbines working so well. The amount of energy they’ve produced is equivalent to the annual energy needs of 7,758 homes according to Ofgem figures, which means it’s powering the equivalent of all the Berwickshire Housing Association homes, and a further 6,000 households in the area.

By helping to push gas and coal-fired power stations offline it has saved over 6,100 tonnes of carbon dioxide emissions so far.

We’re also delighted to have made our first community benefit payments, totalling £37,500, to two local organisations – Oldhamstocks Community Association, and Cockburnspath and Cove Community Council. Both organisations do great work supporting local good causes and it’s hoped that some of the funds distributed this year will go towards a new village hall being planned in Oldhamstocks.”

“This has been a very good first year for us. It has been fascinating learning about the running of the wind farm and we are very upbeat about the future and the income we will be able to put back into the communities.”

“We are delighted with the performance of The Fishermen Three, which has exceeded the forecast for its first year. The wind farm is on course to make an important financial contribution to our work helping Scottish communities address their energy issues.”