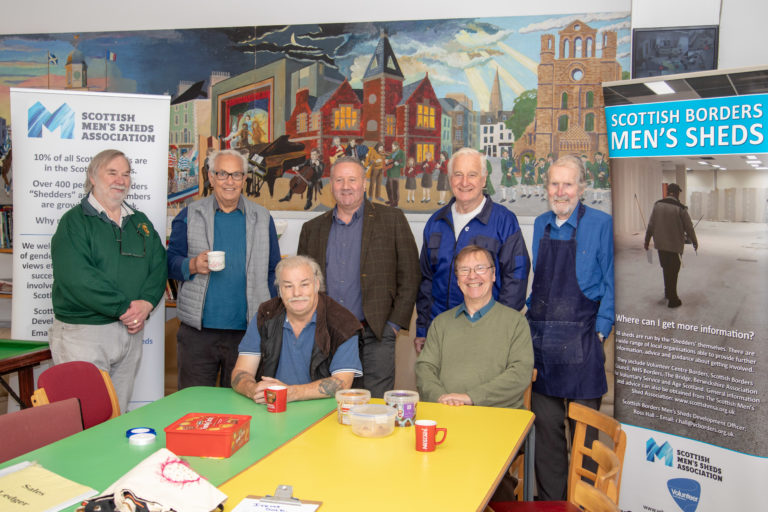 The growing Men’s Shed movement in the Borders offers men (and women) the opportunity to come together, pursue hobbies and share skills and experience.

In the Borders there are currently 10 sheds at varying degrees of development (Eyemouth, Coldstream, Duns, Galashiels, Selkirk, Hawick, Kelso, Jedburgh, Lauder and Peebles) with over 470 members.

There is growing evidence of the benefits Men’s Sheds have on health and well-being and research has shown that those involved live healthier, happier and more contented lives.

Ross Hall from Galashiels was appointed to the role and he has already proved a great help to existing Men’s Sheds, learning about particular issues they have and working with them to resolve problems.

“In late 2018, I was appointed Border Men’s Sheds Development Officer in a largely rural region where the demographics indicate there is an ageing and retired population. The Borders Men’s Sheds Network was a loose collection of around 280 signed up ‘Shedders’ in six towns.

Following a public meeting supported by NHS Borders Healthy Living Network, Age Scotland and VCB, Gala Men’s Shed was the first to open in 2014 followed closely by The Jed Shed, Hawick, Coldstream, Eyemouth and Selkirk Community Shed. All the Sheds obtained charitable status and they work because they allow men to gather socially, regularly and safely. They are a grass roots movement, built from the ground up by local men and the community.

The huge increase in ‘Shedders’ – now at over 470 members (from 280) region wide in six months – can be attributed to the joint working streams in process between the Borders Shed Network and the current funders. Without this support several of the newer Sheds may have struggled, however, the belief in the concept is demonstrated by the financial support afforded to the Development Officer’s post and amount of material support donated to the various Sheds by the region’s Registered Social Landlords (RSLs).

Clearly without the support of the housing associations some of the Sheds would struggle to continue in their present form.

Since I have been in post (Nov 2018), four new Sheds have evolved. Often referred to as Men’s Community Sheds they are now open in Kelso, Peebles, Duns and Lauder. One of our Sheds has a 33% ladies membership, a hugely positive step.

I look forward to a growth in Shed membership, their work activities and intergenerational work in the community and this is hugely supported by our RSLs, the NHS and the Scottish Borders Council. With this continued and crucial support from our funding partners, I know that the Borders Shed movement will continue to send a positive message to our community.”

“The Men’s Shed is a brilliant way of bringing people together around something creative and fun. Men aren’t always the best at making new friends or talking to one another, but get them around a piece of wood or a DIY task and it’s amazing how they open up.”

“I feel a sense of worth and love the way all the men work together.”